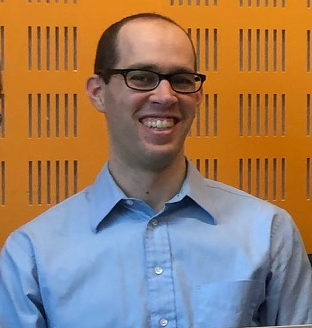 This post is a summary of six papers I wrote with collaborators during my Ph.D. about visualizing spacetime curvature around binary-black-hole mergers. 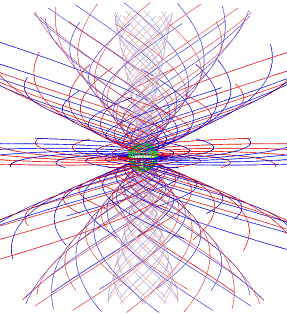 In empty space, the ten independent components of the Weyl tensor encode all the information about the spacetime curvature, but the Weyl tensor itself is difficult to visualize and to grasp its physical meaning. The Weyl tensor in a surface of constant time splits into two symmetric and trace-free tensors called its electric and magnetic parts (in analogy to the E and B fields of electromagnetism). The interpretation of the electric and magnetic Weyl tensors has been known for quite some time: the electric part describes the tidal acceleration of two spatially separated observers, and the magnetic part relates to the differential precession of two adjacent inertial gyroscopes.

To visualize the Weyl tensor’s electric and magnetic parts, we used the facts that these tensors are always diagonalizable, the sum of their eigenvalues will be zero, and the corresponding eigenvectors are orthogonal. We formed streamlines from the eigenvectors, which we call tendex lines for the electric part and vortex lines for the magnetic part, and we plotted these lines and their corresponding eigenvalues, which we call tendicities and vorticities, respectively. Extended observers are stretched along a tendex line with negative tendicity and squeezed along a tendex line of positive tendicity; similarly, observers with gyroscopes tied to their heads and feet are twisted clockwise along a positive-vorticity vortex line and counterclockwise along a negative-vorticity line.